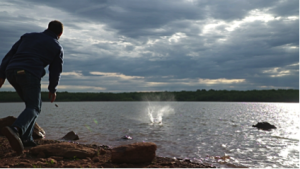 A man was exploring caves by the Waters edge. In one of the caves he found a canvas bag with a bunch
of hardened clay balls. It was like someone had rolled clay balls and left them out in the sun to bake.
They didn’t look like much, but they intrigued the man, so he took the bag out of the cave with him. As he
strolled along the shore, he would throw the clay balls one at a time out into the water as far as he could.
He thought little about it, until he dropped one of the clay balls and it cracked open on a rock. Inside was a
beautiful, precious stone!

Excited, the man started breaking open the remaining clay balls. Each contained a similar treasure.
He found thousands of dollars worth of jewels in the 20 or so clay balls he had left.
Then it struck him. He had been on the beach a long time. He had thrown maybe 50 or 60 of the clay balls
with their hidden treasure into the water. Instead of thousands of dollars in treasure, he could have
taken home tens of thousands, but he had just thrown it away!

It’s like that with people. We look at someone, maybe even ourselves, and we see the external clay vessel.
It doesn’t look like much from the outside. It isn’t always beautiful or sparkling, so we discount it.
We see that person as less important than someone more beautiful or stylish or well known or wealthy. But we
have not taken the time to find the treasure hidden inside that person.

There is a treasure in each and every one of us. If we take the time to get to know that person, and if we ask
God to show us that person the way He sees them, then the clay begins to peel away and the brilliant gem
begins to shine forth.
May we not come to the end of our lives and find out that we have thrown away a fortune in friendships
because the gems were hidden in bits of clay. May we see the people in our world as God sees them.

I am so blessed by the gems of friendship I have with you.. Thank you for looking beyond my clay vessel.

APPRECIATE EVERY SINGLE
THING YOU HAVE, ESPECIALLY YOUR FRIENDS!
LIFE IS TOO SHORT AND FRIENDS ARE TOO FEW!

Do not ask the Lord to Guide your Footsteps if you are not willing to MOVE your Feet’
From: By Grace Christian Ministries-

This website uses cookies to improve your experience while you navigate through the website. Out of these cookies, the cookies that are categorized as necessary are stored on your browser as they are essential for the working of basic functionalities of the website. We also use third-party cookies that help us analyze and understand how you use this website. These cookies will be stored in your browser only with your consent. You also have the option to opt-out of these cookies. But opting out of some of these cookies may have an effect on your browsing experience.
Necessary Always Enabled
Necessary cookies are absolutely essential for the website to function properly. This category only includes cookies that ensures basic functionalities and security features of the website. These cookies do not store any personal information.
Non-necessary
Any cookies that may not be particularly necessary for the website to function and is used specifically to collect user personal data via analytics, ads, other embedded contents are termed as non-necessary cookies. It is mandatory to procure user consent prior to running these cookies on your website.
SAVE & ACCEPT